Monkeypox is a rare viral zoonotic disease (transmission from animals to humans) similar to human smallpox, whose causative agent, variola virus, is also a member of the Orthopoxvirus genus. However, monkeypox infection is less transmissible human-to-human than smallpox and also less deadly (case fatality estimates for monkeypox are up to 10%).

Until recently, infections of monkeypox in humans had mostly been limited to central and western regions of Africa, where the virus is naturally occurring. However, during the ongoing monkeypox outbreak in Nigeria, increased human-to-human transmission has been observed and the wide geographic spread, predominantly in urban areas, has raised concerns over the disease. The recent cases of monkeypox observed in the UK, Israel and Singapore all originated from Nigeria, demonstrating that the virus is no longer a domestic challenge only. Nigeria is Africa’s largest country by both population and economy, including the large oil and gas industry, which employs a significant number of local and foreign employees. It is estimated that more than five million people travel to countries affected by monkeypox in Central Africa each year, suggesting a market potential for a monkeypox vaccine for travelers. 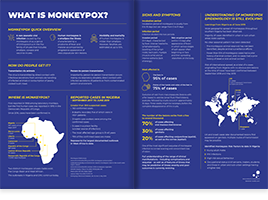