Mr. Chaplin joined Bavarian Nordic in 1999. He was appointed executive vice president in 2004 and President & CEO in 2014. Prior to joining the Company, Mr. Chaplin worked for several years both in the UK and Australia developing vaccines against infectious diseases. Mr. Chaplin holds a Ph.D. in Immunology from Bristol University, and he is the general manager of Bavarian Nordic GmbH. He is a British national, born in 1967.

Mr. Juuel joined Bavarian Nordic in 2018 from Orexo AB, a specialty pharmaceutical company listed on the Nasdaq Stockholm exchange, where he served as Chief Financial Officer since 2013. Prior to Orexo, Mr. Juuel held senior positions at several large and diverse organizations including Group CFO of Virgin Mobile (Central and Eastern Europe), CFO of GN ReSound, and CFO of NNE Pharmaplan. Mr. Juuel began his career at Novo Nordisk in 1992, and during his 15-year tenure with the company held several senior finance positions in Denmark and abroad. Mr. Juuel holds an M.Sc. in Economics and Finance. He is a Danish national, born in 1965. 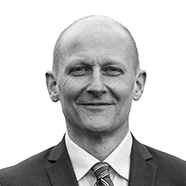 Mr. Birk joined Bavarian Nordic in 2008 from Coloplast where he held various management positions focusing on supply chain and production. Since joining Bavarian Nordic, he has served in positions of increasing responsibility, most recently as Senior Vice President, Strategy, People and Organization. Mr. Birk holds a Masters of Business Administration from Henley Business School, and he is a Danish national, born in 1974.

Mr. May joined Bavarian Nordic in January 2020 from GlaxoSmithKline (GSK), where he served as vice president and global vaccines commercialization leader and was responsible for global strategic leadership and performance of several lifesaving vaccines, including Rabipur/RabAvert and Encepur, which Bavarian Nordic acquired from GSK in 2019. Mr. May holds a PharmD and MBA. He is a French national, born in 1967.

Mrs. De Moerlooze joined Bavarian Nordic in April 2020 from Takeda Vaccines, where she served as Vice President and Global Program Lead for vaccines against Zika virus and Norovirus. Prior to joining Takeda, she worked at GlaxoSmithKline (GSK) for more than 15 years, holding various leading roles in medical affairs and vaccine development working with numerous life-saving vaccines including Rabipur/Rabavert and Encepur. Mrs. De Moerlooze holds a PhD.

Ms. Kerns joined Bavarian Nordic in 2020. She previously worked for more than 11 years in Novo Nordisk, holding various leadership roles with increasing responsibilities, including 5 years abroad where she was responsible for establishing a new regional organizational structure and driving the HR development and communication strategy. Prior to Novo Nordisk she worked for 8 years in the financial sector with employer branding, reputation management and change communication. Ms. Kerns holds a Master of Science in International Business Administration and Modern Languages from Copenhagen Business School.